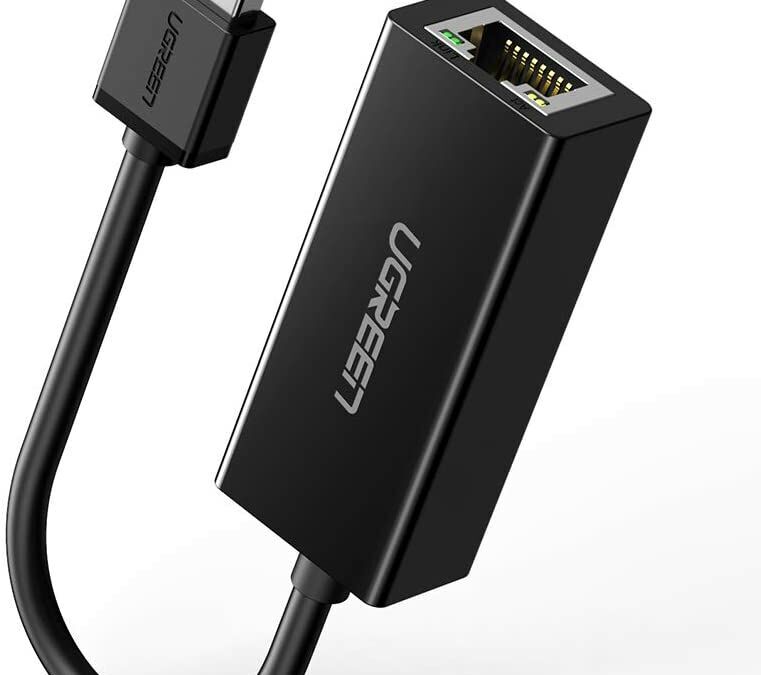 An Ethernet adapter connects a computer to the Internet or to a local network via a wired connection. Most computers include an Ethernet port on the motherboard and do not require a separate adapter, but some laptops only support Wi-Fi connections out of the box. For these situations, or to replace the integrated network adapter on a desktop computer’s motherboard, you can buy and install a separate Ethernet adapter.

As more local networks started to use wireless systems, the Ethernet adapter started to lose ground to network adapter cards that fit into various devices to allow wireless connections. An Ethernet adapter is still instrumental in affecting physical cabled hookups, but many users choose to use a wireless router and wireless adapters for individual devices.

Ethernet adapters require a driver to operate. Often, the operating system will automatically install a compatible driver after you add an adapter. If the system can’t find a driver on its own, you’ll need to download the driver from the adapter manufacturer’s website. After installation, connect the adapter to an open port on your router — or directly to your modem — with an Ethernet cable to connect to a network or the Internet.

Below is a list of some of the very best Ethernet adapters that you can find on Amazon. 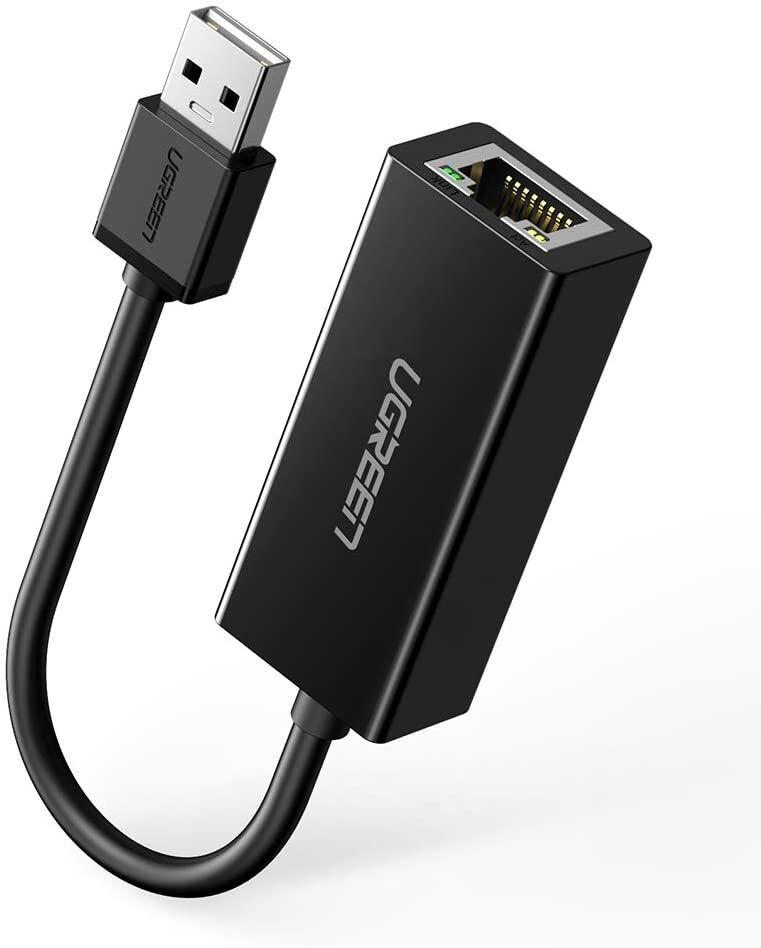 This lightweight USB to network adapter is also a perfect accessory for adding a standard RJ45 port to your Ultrabook, notebook, or Macbook Air for file transferring, video conferencing, gaming, HD video streaming and an excellent Standby for Macbook without an Ethernet socket when wireless fails. It connects your computer or tablet to a router, modem or network switch for network connection. 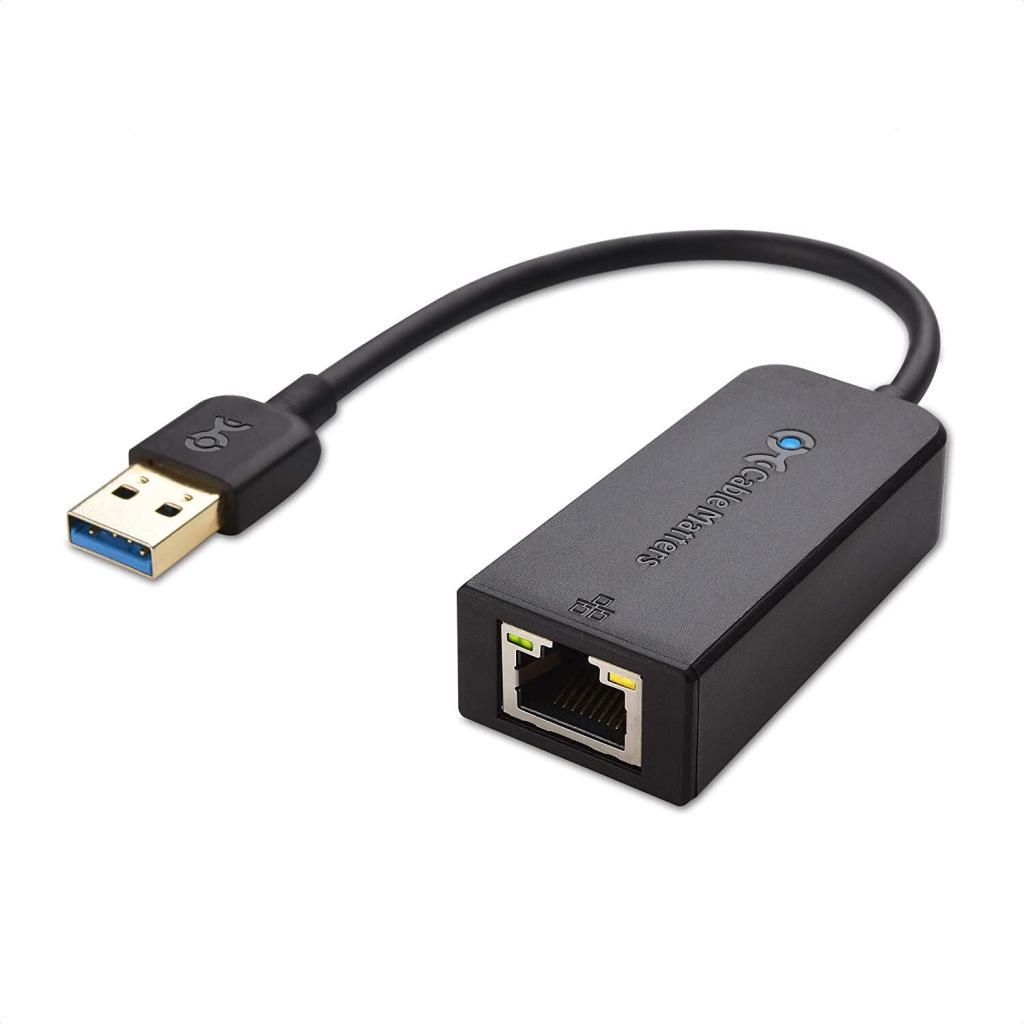 Simply plug the adapter into the USB port of your computer without downloading any external software drivers. Connect to an available wired Ethernet network at home, the office, or in the hotel with this lightweight adapter that travels easily in your laptop sleeve and it features a universal compatibility with Chrome OS, Linux, Mac OS X, and Windows operating systems.

The USB to Gigabit Ethernet adapter supports super speed USB 3.0 data transfer rate up to 5 Gbps for 1000 BASE-T network performance with backwards compatibility to 10/100 Mbps networks and it can also serve as a wireless alternative USB to RJ45 adapter for connecting to the Internet in Wi-Fi dead zones, streaming large video files, or downloading a software upgrade through a wired home or office LAN. 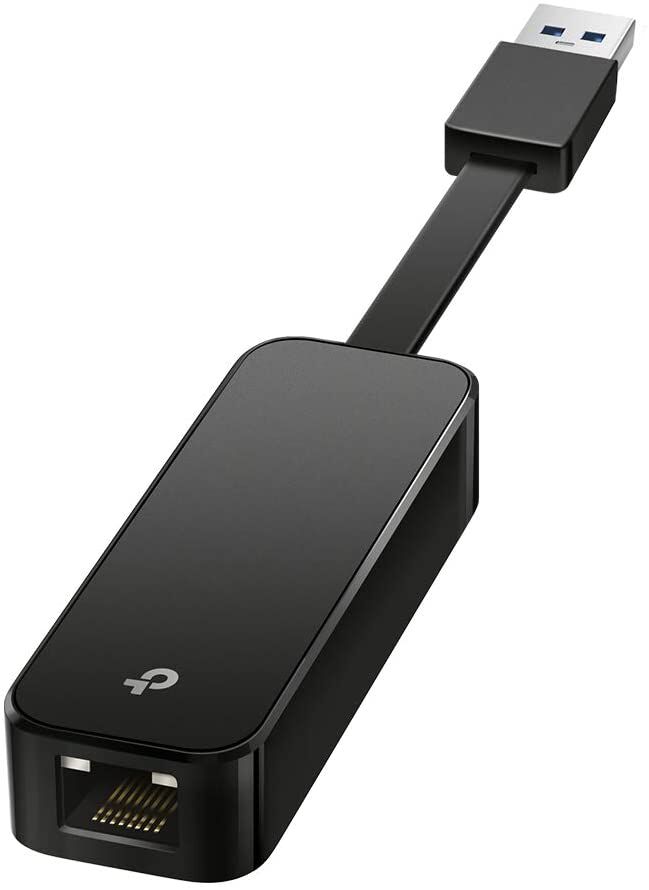 TP-Link USB Ethernet Network Adapter is Compatible with Nintendo Switch, MacBook, Surface Pro and your Notebook PC.  The TP-Links UE305 is a USB 3.0 male A to RJ45 female Ethernet adapter which connects your computer or tablet to a router or network switch for wired network connection. It adds a standard RJ45 port to your Ultrabook, notebook for file transferring, video conferencing, gaming, and HD video streaming.

The Foldable and Portable design of this adapter will ideally suit your Ultrabook as the UE305 USB RJ45 adapter is mini and portable, perfect to take on the go. Just plug in and be ready to use in seconds—no manual driver installation required. The intuitive LED indicator lets you know the network status at a glance. Plug & Play is enabled for Nintendo Switch, Windows 10/8.1, and Linux OS.
Give wired internet connections to USB devices; give your laptop, computer, and other USB web devices access to wired network connections by connecting into the modem, router, or network switch. It’s built for most of today’s devices to enjoy powerful, instant wired network connections and ideal for those without a built-in RJ45 Ethernet port. 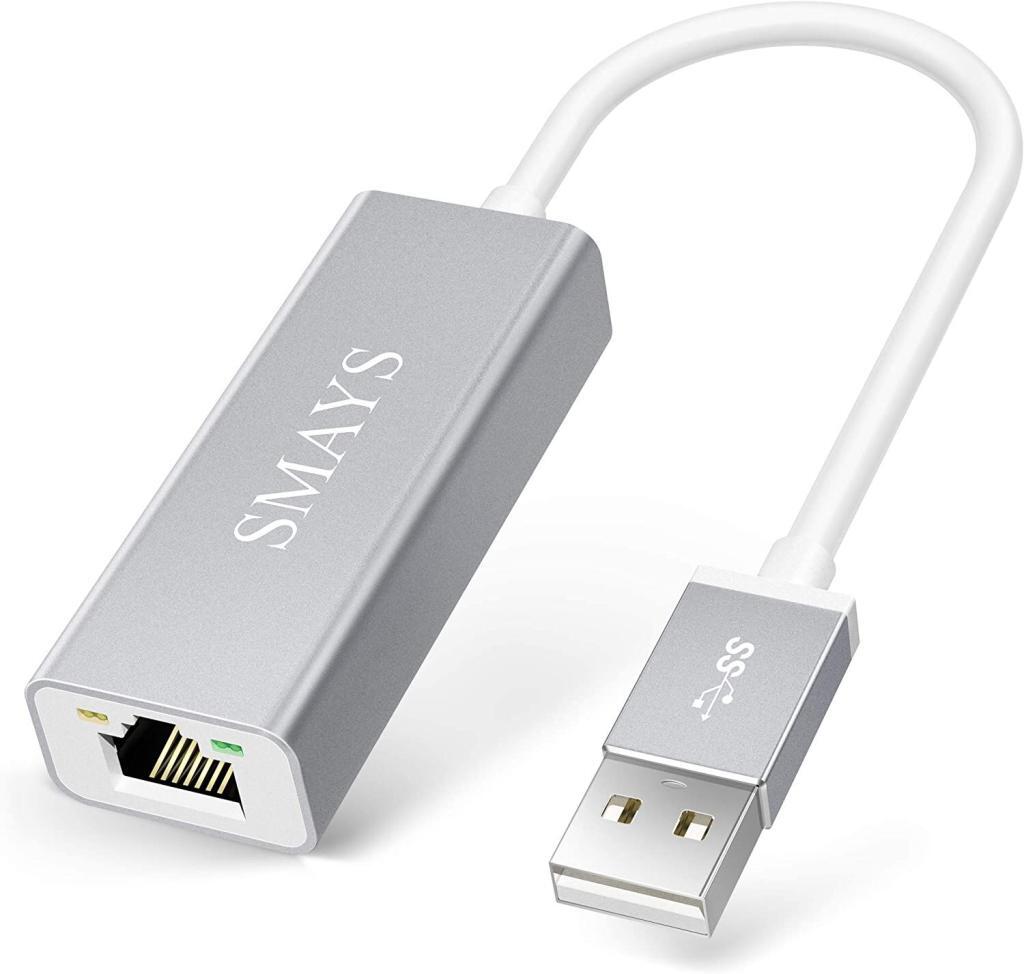 It is a USB type A LAN adapter that can connect the Switch body to the Internet via a wired LAN. You can enjoy network-ready games comfortably without worrying about communication disconnection or delay that is likely to occur when connecting to Wi-Fi.

It also corresponds to a personal computer not equipped with a wired LAN port (corresponding OS: Windows 7/8/10). It can be used simply by connecting to the USB port of the personal computer; the installation of driver software is also unnecessary. 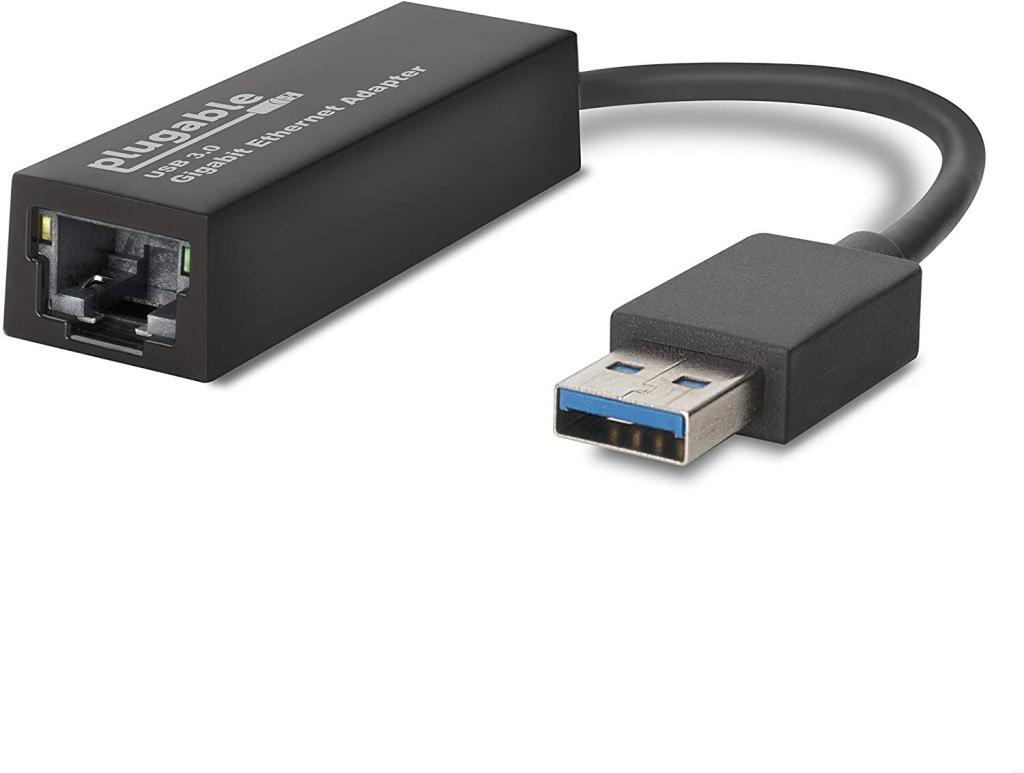 The USB 3.0 systems support theoretical maximum transfer speeds up to 5Gbps and USB 2.0 supports up to 480Mbps. In practice, most machines will see up to a doubling of network speeds by moving from a 100Mbps Fast Ethernet to a 1000Mbps gigabit Ethernet via USB 2.0, and could see even more substantial gains on USB 3.0.

The Plugable USB to Ethernet adapter also features an automatic driver installation via Windows Update on Windows 10, 8.x, 7, and XP (with existing internet connection). Functionality built into the Linux kernel from 3.9 onward. 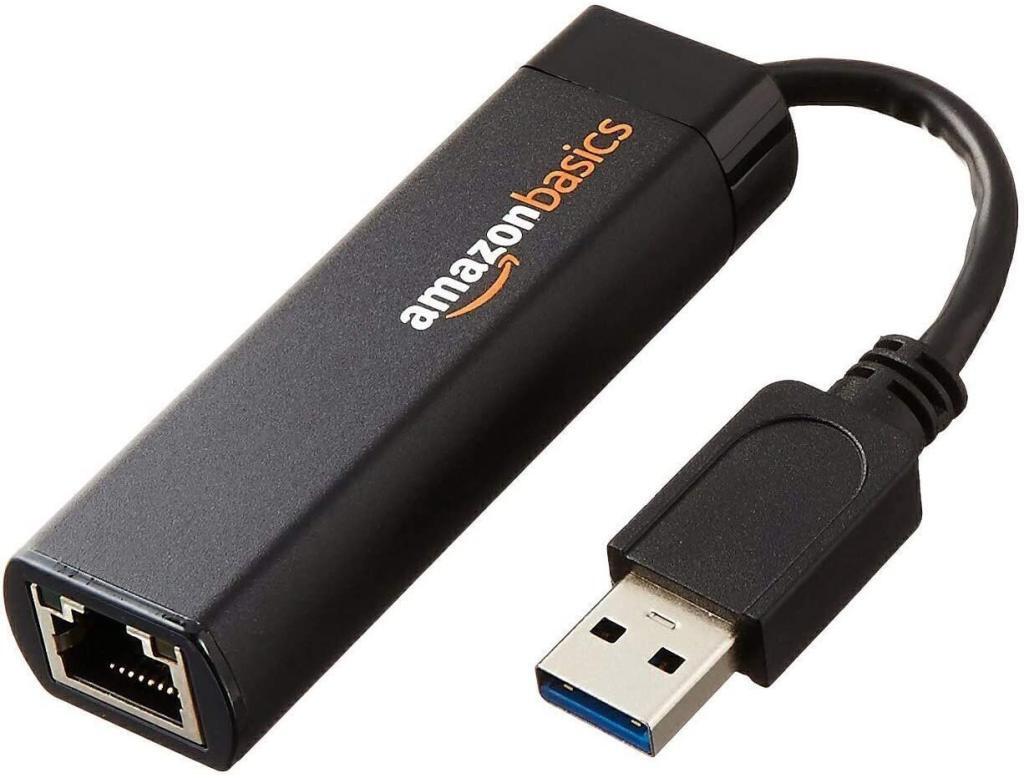 Want to connect to a network, but your computer or tablet lacks an Ethernet port? No problem. With this Amazon Basics USB 3.0 to Ethernet adapter, you can easily connect your USB 3.0 device to a router, modem, or network switch to deliver Gigabit Ethernet to your network connection. The adapter instantly bridges the gap. Simply insert the adapter’s USB connector into your device’s USB port and connect your Ethernet cable to the Ethernet port on the other end of the adapter.

For faster data-transfer speeds, the Amazon Basics USB 3.0 to Ethernet adapter can also be used to add wired network support to Chromebooks and Android tablets or to USB 2.0 laptops or desktops that are currently limited to 10/100 Ethernet. The adapter also works well for replacing a broken internal network card, adding a separately routable network interface, and/or sending files peer-to-peer over Ethernet.

Worthy of note is that this Ethernet adapter is compatible with Windows 10/8/7 and Mac OS but does not support Chrome OS, Windows RT or Android.

Some manufacturers claim their adapters work better and improve system performance, but in most cases, one Ethernet adapter is as good as another and listed above are the top ones you can go for on Amazon based on customers preference and reviews.